PS5 vs Xbox Series X: what we know so far PS5 vs Xbox Series X: what we know so far

Things have got very interesting in the PS5 vs Xbox Series competition, as both Microsoft and Sony have revealed a release window for their consoles of "Holiday 2020" (between October and December).

In other words, both next-generation consoles will be releasing at the same time and therefore going directly head-to-head, most likely splitting gamers once again into camp 'Xbox' or 'PlayStation'.

The upcoming console launches represent big stakes for both manufacturers, with Sony's lead in the current console war up for grabs as new high-powered hardware hits the market. But can the Xbox Series X take the crown, and what will the new consoles actually do differently from the older Xbox One and PS4?

We've put together this Xbox Series X vs PS5 guide to put both incoming consoles under the microscope, and gauge whether what we know about both consoles' pricing (definitely expensive), release date (late 2020), and hardware capabilities (lots) can tell us about the future of console gaming.

Though it was Sony to make the first move, giving the first concrete details about its PS5 back in April 2019, Microsoft’s E3 2019 showcase showed that both companies appear to be singing from the same hymn sheet with their new machines’ internal specs.

The PlayStation 5 will run off a custom-built version of the third generation AMD Ryzen chipset, packing in 8 cores with the company's new Zen 2 architecture and Navi graphics. It’s a system that will be able to support ray tracing – a performance-intensive lighting technique that has previously been the reserve of expensive high-end PC GPUs, and which we now know will be "built into the GPU hardware" for the PS5.

Sony has also talked of the console setting a new “gold standard” in immersive, 3D audio, particularly for those using a headset whilst playing. (Some leaked patents, too, show off some intense ventilation design for handling all that processing power.)

The PS5 will also support screen resolutions of up to 8K – far higher than the standard 1080p HD of most people’s televisions, let alone that of the increasingly popular 4K. It’ll also work at 120Hz refresh rates, allowing for super-smooth movement in games. These are incredibly performance intensive specs, so we wouldn’t expect a game to hit these standards regularly (not to mention requiring an expensive TV that will support them), but it’s good to see what Sony is aiming at.

Perhaps the most interesting element of the Sony build is its commitment to using SSD storage. The solid state drive in the PlayStation 5 will again be a custom-built piece of hardware, and Sony has already been showing off its technical prowess with a demo of its existing Spider-Man PS4 game. On PS5 hardware, the game is able to race around an incredibly-detailed New York City at incredibly high speeds without any delay in geometry loading or texture streaming, something that would never be possible on PS4. 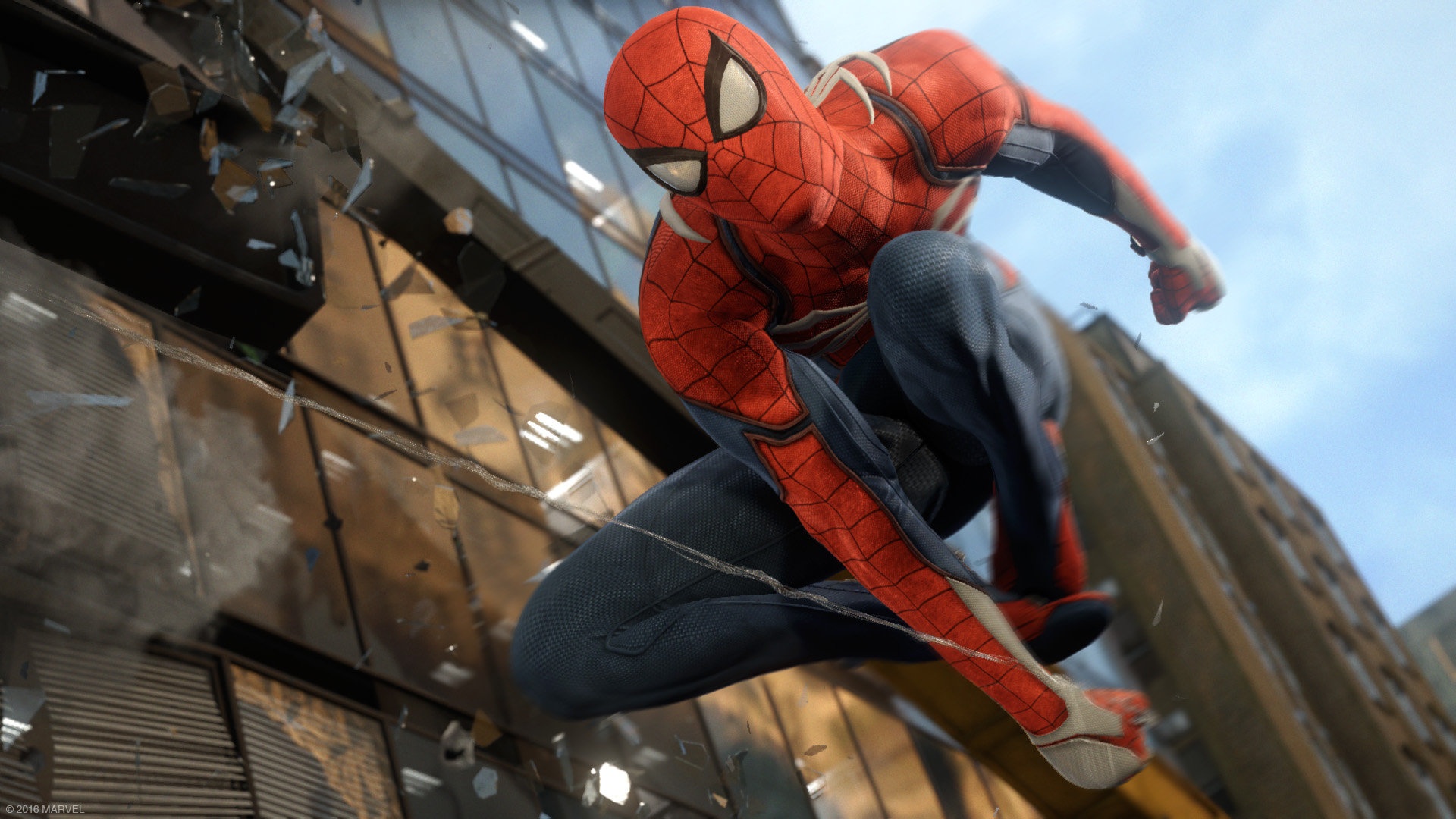 We've got some new tidbits on the next DualShock controller too – though there's currently no official 'DualShock 5' branding. A blog post by PlayStation said that haptic feedback technology would replace last-gen "rumble" features, while "adaptive triggers" will be able to recreate different levels of resistance for different weapon loadouts or types of terrain you might be navigating in-game.

The Xbox Series X, at this stage, is looking startlingly similar.

It too will use custom AMD internals using the same Zen 2 and Navi architecture of the PS5, making it 4x more powerful than the Xbox One X – this generation’s most technically-impressive gaming hardware.

It too will be able to run content (if not games) at an 8K resolution, and it too will support 120Hz refresh rates. The Xbox Project Scarlett will match the PS5 by offering ray tracing capabilities, and it’ll have an SSD too, here also used as virtual RAM to lift load times by up to 40x. Standard RAM will be of the GDDR6 variety, in an amount yet to be determined.

The next Xbox will also be backwards compatible with the Xbox One’s supporting hardware accessories, meaning that you won’t have to rush out and buy new pads and headsets to accompany the console at launch. And, if you’re a sucker for buying boxed games over making digital purchases, it’s already confirmed to have a physical disc drive included.

It’s worth mentioning that rumors surrounding Xbox Series X have also involved the possibilities of there being another disc-less console on the horizon codenamed Project lockhart. The theory here is that the Xbox Series X will be a high-end machine, while Lockhart would be a budget option focusing on streaming (possibly in the vein of the Xbox One S All Digital Edition). At this stage however, they remain merely rumors, as Microsoft is yet to confirm or deny the existence of a duo.

If you're concerned about being eco-friendly then the Xbox Series X may not be the best choice. While Sony has claimed the PS5 will be much more energy efficient than its predecessor, the PS4, analysis by Digital Foundry suggests Series X will be pulling twice the power of the Xbox One X – and putting out more heat as a result.

Xbox Series X vs PS5: games we expect to see

It’s early doors for the new next-gen consoles, but already we’re getting a picture of the sort of experiences you can expect to see on the Xbox Series X and the PS5.

Let’s kick off with the Xbox, as Microsoft has been a little more open with its line up upfront. First off, Microsoft has confirmed that Halo Infinite, aka Halo 6, will be a launch title for Xbox Series X. The Halo franchise is a unit shifter for Microsoft, a big-budget FPS series that will have been left on a bit of a cliff hanger for five years come the ‘Holiday 2020’ release of Halo Infinite. This is a very big deal. In addition, we also know Senua's Saga: Hellblade II will be releasing for Xbox Series X.

Perhaps just as much of a big deal as Halo is the fact that Xbox Series X will be backwards compatible with all existing Xbox platforms from launch. If you have games for the original Xbox, the Xbox 360 and the Xbox One, there’s a good chance they’ll work on Xbox Series X – especially your Xbox One library. How deep Microsoft goes on the libraries of the other generations remains to be seen, but it’s been relatively generous in their support during the Xbox One’s lifetime.

We currently don't know any of the PS5's launch titles but we do know the likes of Watch Dogs: Legion and Godfall will be making their way to Sony's next-gen platform. Sony has also confirmed that its PS5 will be backwards compatible, at least with your PS4 game library. How far back it will support the PlayStation family’s game history remains to be seen, but it’s been a little less supportive in this regard during the current generation, aside from within its paid-for PlayStation Now streaming service.

Which brings us onto the conversation surrounding game streaming. With Google entering the gaming fray with its Google Stadia game streaming platform, Microsoft and Sony have actually entered a partnership to share and collaborate on game streaming technologies for the next generation. Exactly how this will play out remains to be seen. But with Sony already hosting PlayStation Now, and Microsoft pumping cash into its Project xCloud, don’t be surprised if a good chunk of your game playing time is streamed in over the web during the next generation.

As for other titles? We can make some educated guesses that some of the more ambitious games that are currently slated as swansongs for this present generation of consoles will make their way over to the newer machines in "remastered" or "definitive" editions.

We're expecting a lot of games that are currently in development, and due for release next year, will be cross-generation titles. That means we're expecting to see the likes of Cyberpunk 2077, Ghost of Tsushima and The Last of Us: Part 2 on both current and next-gen consoles.

At this point, talking about the price of Xbox Series X or the PS5 cost is an exercise in speculation. It’s simply too early to tell, and there are too many missing factors in their make up for us to make an informed decision on the specifics of their final price.

But what we can say for certain is that the specs teased above don’t come cheaply. These are going to be high-end machines at launch, and will have significant price tags attached as a result.

What we can do, however, is look back at the comparative pricing of the Xbox One and PS4 at launch. One of the reasons the PS4 proved the more popular console during this generation was the fact that it launched at the more attractive price point of $399.99 / £349.99. That was a relative steal compared to the $499 / £429 Xbox One, which at launch had to factor in the cost of its ill-fated (and relatively short lived) Kinect motion tracker. The Kinect was initially hailed as one of the key differentiators between the consoles, but proved unpopular with both developers and gamers, leading to Microsoft slowly phasing it out in an effort to drive the price of the overall package down with later console revisions.

Microsoft will not want to make similar mistakes again – its launch pricing (along with its strange initial focus on entertainment capabilities over gaming software), were key factors to its initial struggles, which it’s spent this entire generation fighting against. One company will inevitably undercut the other, but with specs at this stage looking so similar, don’t expect it to be so dramatic a difference this time around.

There’s so much yet to learn about the PS5 and Xbox Series X. But at this early stage, the similarities between the two consoles are striking.

The commitment to SSD tech, suggests a parity across both consoles for third party developers to work with. Both consoles will be making great efforts to offer deep backwards compatibility across their archives. And the astonishing fact that they’ll be sharing streaming technologies is the sort of collaboration that would once have been unheard of. Microsoft and Sony have clearly been listening to their fanbases – people don’t care about inter-company politics, they just want the best gaming experience possible.

But there’s still a tribalism among the fans, and so, as ever, first party gaming content is going to be perhaps more important than it’s ever been. With so many ways to play, from remote access to streaming, the hardware becomes far less important than the experiences they offer – especially when the two platforms are looking increasingly similar. Microsoft is the first out of the gate to announce a platform exclusive title with Halo, but Sony absolutely destroyed the competition in the PS4 generation with its exclusives. Hope for, and expect, nothing less in the console wars to come.